A project is a cluster of large number of organisations, stakeholders, data/information, technology and other attributes. Each stakeholder/organisations have different objective and interest in viewing the project from their perspective. This difference in opinion gives rise to interfacial conflicts. The poorly managed conflicts weaken the project performance. Thus interface management holds a strategic importance in managing construction projects.

WBS matrix concept breakdown a project into activity and product oriented structure to identify the interfaces .The interfaces were classified as organisational, technical, geographical, and time interfaces. In the case study of mass rapid transit system, WBS matrix was developed by generating work package sheets and work package reports for each trades like power supply, track works, etc. using excel and the entire interface in each trade was identified to improve the interface management [4].

A case study was done on the use of the interface management software n-pulse. n-pulse integrates schedule, resources, inventory, BOQ, drawing data and provides proactive information about the schedule delays, cost overruns. The roles of stakeholders like client, PMC, general contractors and subcontractors, consultants in the case study were studied [7].

A model for assessing the relationships among IT application, KM practice adoption and project success was framed. Mediating role of KM practice adoption in relationship between IT application and project performance is studied and also the effect of project type on project success and knowledge management is also studied. This model served as a basic framework for the development of preliminary framework for this research [8].

From the extensive literature reviews it was found that no conceptual model was proposed to measure the influence of interface management on project performance indicators such as cost, schedule, quality and safety and also interrelationships among IT application, interface management, project performance and project benefits was not studied. This study aims at fulfilling these knowledge gaps.

The initial conceptual framework is developed with the aid of literatures on interface management. The initial PLS model comprises 51 attributes for 12 constructs as shown in Figure I The following are the hypothesis set up in PLS path model.

Based on the relevant literatures, following hypotheses are postulated.

People/participants are considered to be influenced by interface management. The individuals in the organisations perform certain activities which are interrelated and they have to be properly monitored to avoid conflicts and poor project performance. From this perspective people/participants are segmented as communication, coordination, trust, organizational structure, decision making, and financial issues among participants.

The multidisciplinary teams involved in the construction projects implement their own methods/process to attain their objective. The methods/process of individual teams has to be communicated and co-ordinated for the successful outcome of a work. Methods/process focuses on organisation’s potential to choose appropriate construction methods, to resolve the issues in implementing new technologies & methods and ability to resolve construction and assembly problems due to inferior work sequence & handling methods.

Labor, equipment and material are the conventional resources to support the construction projects. Interface management includes space and information also as resources. The availability of labor, cross functional trained teams, materials, equipment proves to be a difficult task. Inadequate space among labor undertaking concurrent activities, storage of materials, movement of equipment are due to poor interface management.

DEMATEL (Decision Making Trial and Evaluation Laboratory) model which shows IT ability to apply is the most important factor in interface management of the project [6].

The above hypotheses and conceptual framework were developed with the help of relevant literatures. The Figure I represents the variables and theoretical framework that links the constructs. This framework validates the association among IT application, interface management, project performance in term of schedule, cost, quality, safety.

The research was carried out in 3 phases. In the first phase with the help of relevant literatures, factors for interfacial issues were identified and grouped under relevant constructs. The conceptual model for the study was framed with constructs and interfacial attributes.

In the third phase, the data collected from the industry wide survey were filtered for analysis and the data was analysed using PLS-SEM (Partial Least Square- Structural Equation Modelling) technique. The flowchart of reserch methodology is presented in Figure II. 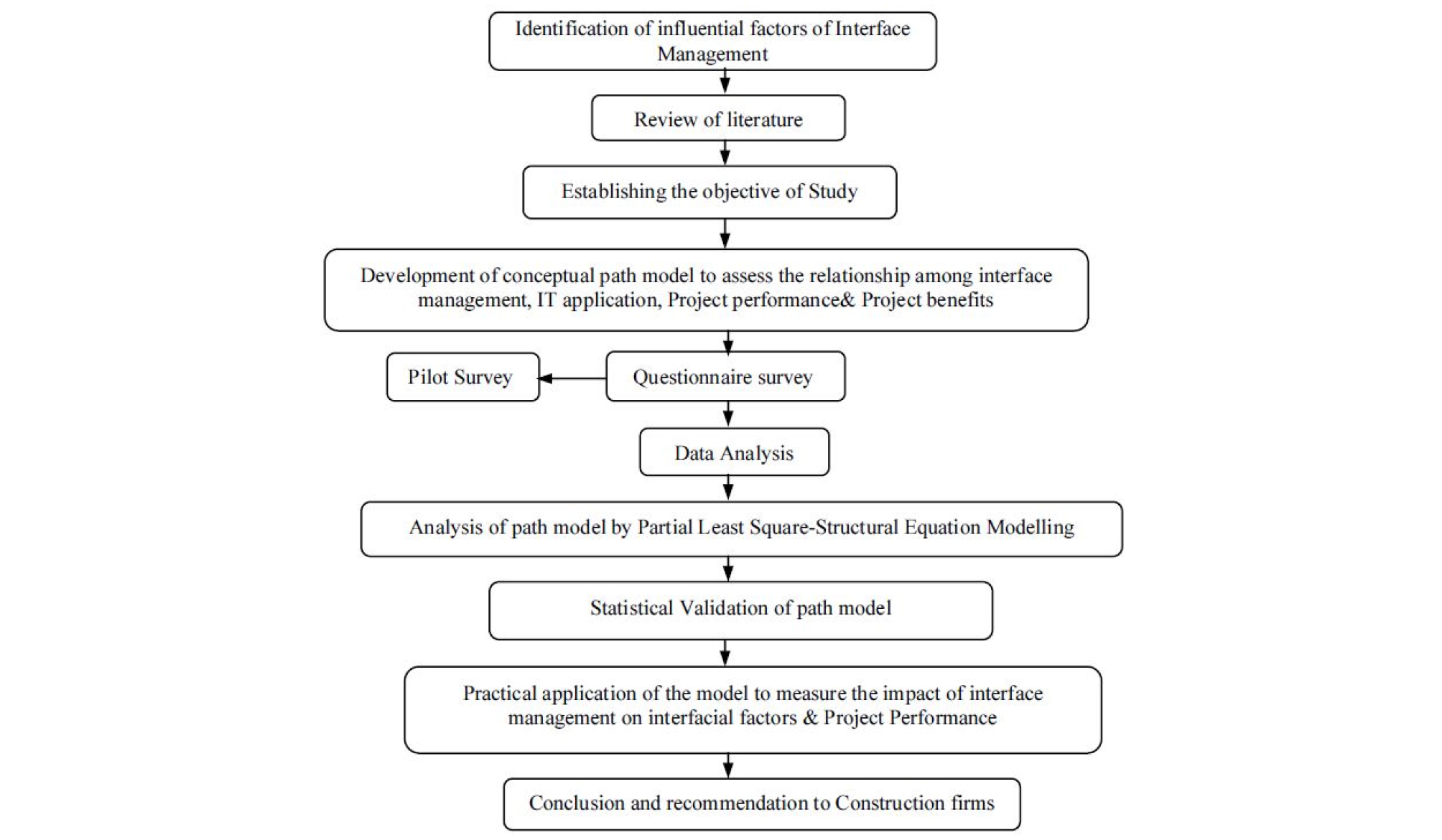 The industry wide survey was conducted among top 50 organisations. The questionnaire was distributed to 200 managers in leading multinational companies, who seemed to be more relevant to our research. At the end 101 questionnaires were completely filled. The data were collected through direct interviews and also through online –basis. A data collection tool was developed for this purpose. Thus the final response rate is 51%.

Among the respondents the positions hold by them were, 62% of Engineers (quality, safety, procurement, structural, etc.), 23% of Project Managers, 8% of Construction manager, 3% of Architects, 3% of Contract administrators and 1% of Interface co-ordinators. 67% of respondents holds bachelor degree, 22% having Masters degree, 7% having graduate diploma and 4% having a doctorate degree.

Structural Equation Modeling is a multivariate analysis technique used to examine the interrelationship between multiple variables simultaneously. SEM is the combination of factor analysis and multiple regression analysis to study the relationship between measured variables and latent constructs. SEM is extremely beneficial in investigating the relationship among the significant variables and to solve complex construction problems [13]. SEM serves as appealing tool in the field of construction engineering and management [14]. The SEM analysis can be either covariance based structural analysis or component based structural analysis using Partial Least Square (PLS-SEM). In this research PLS-SEM technique is used for analysis.

The indicator reliability, convergent validity, discriminant validity are the criteria used for assessing whether the measurement model has acceptable measurement properties [15].The initial model with 51 observed variables is tested using PLS. The indicator reliability is evaluated by examining the outer loadings of the items. Table I shows the final loadings of indicators with value greater than 0.6.

TABLE I. CONSTRUCTS AND INDICATORS OF INTERFACE MANAGEMENT

TABLE III. CORRELATION AMONG THE CONSTRUCTS

The structural model is assessed for path coefficients (β value), significance of R2, effect of size of f2, predictive relevance and mediating effects. The validation of structural model is done by calculating Global fit index and power analysis for the adequacy of sample size. 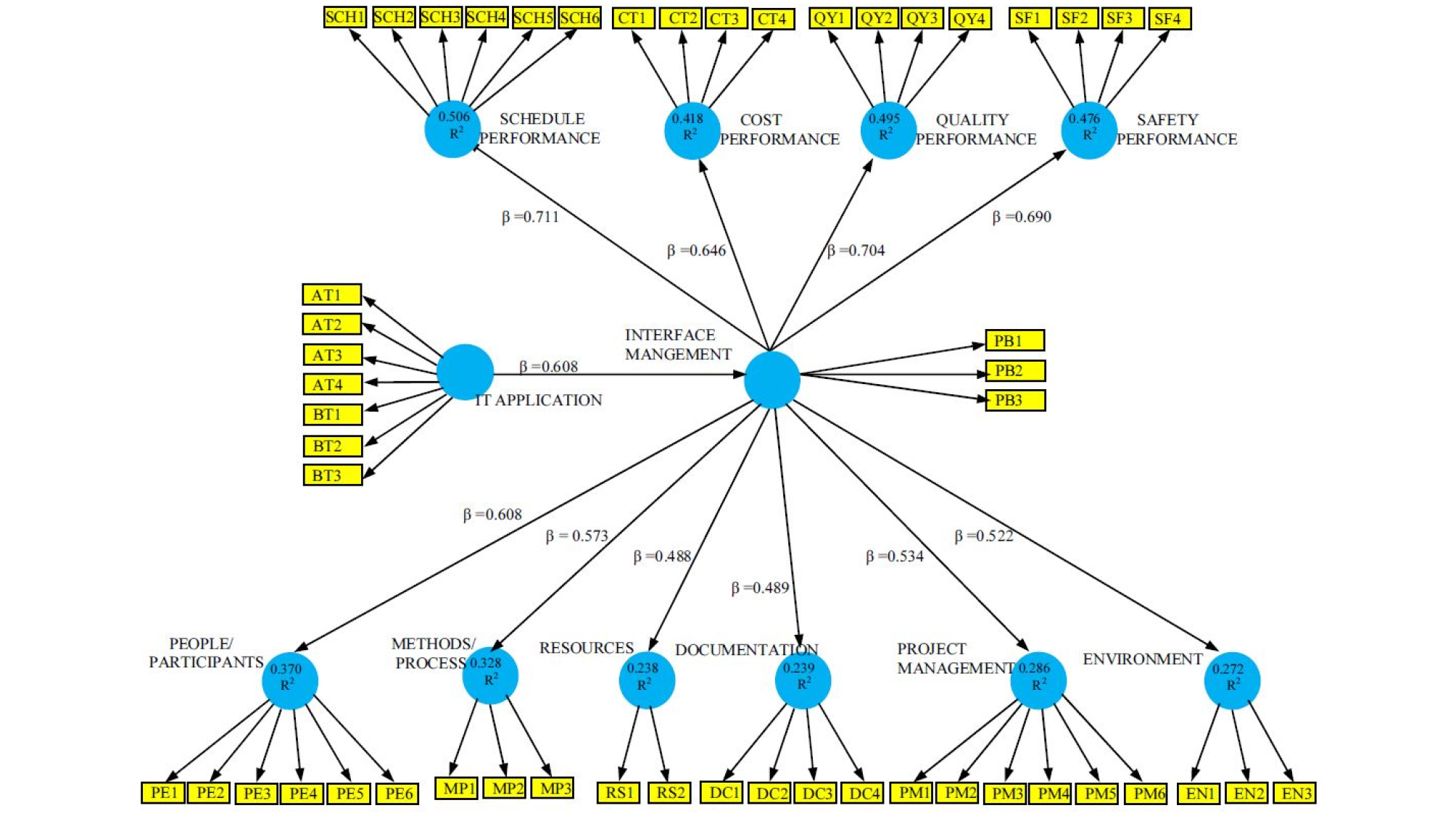 Concerning the hypothesized relationship, all hypothesis from H1 to H11 are supports with t-values greater than 1.96 for the significance level of 5% as shown in the Table IV.

ii) Measuring the value of R2

MEASURING THE VALUE OF R2

GLOBAL FIT INDEX OF THE MODEL

GoF(Global Fit measure) is calculated for PLS path modelling, which is defined as geometric mean of average communality and average R2.GoF is used to assess the model fitness and explaining power of model. The results of global fit index of the model is presented in Table VII The cut-off values of GoF small=0.1, medium = 0.25, large = 0.36. GoF value for PLS model is estimated using the following equation [22].

In this study, GoF value is 0.48, which indicates the model has 48% explaining power on interface management.

The validated model was applied in the construction firms through case studies. The results of the analysis were used to develop the template. The case study comprises two templates. The first template was to evaluate the impact on interface management factors in the particular organisation. The second template measures the improvement in project performance due to interface management.

Construction firms with interface management were identified and two organisations were selected for the case study namely company A and B. A questionnaire was framed and then distributed to the firms A and B. Questionnaire comprises three parts with the first part framed to gather information about the organisation and personal information of the respondent.

The first template is developed to measure the impact on interfacial management factors as shown in Table VIII. From the results given by the PLS-SEM, the outer weights of all attributes of constructs namely people/participants, methods/process, documentation, project management, and environment were used.

Assessment Results of Firms A & Firm B

Company A is one of the largest construction contracting firms in India which has done more than 100 projects. The main industry the company working are Infrastructure, Oil & Gas, Commercial and Industrial Buildings. The company uses ERP to manage interface. Company B is also a large contracting firm with its headquarters in UAE. The company has done more than 50 Oil & Gas and Industrial projects. Aconex is the interface management tool used in the company B to handle the interfaces.

The Tables X and XI gives the respondent’s answer and the corresponding company’s actual level of impact on interface management factors and project performance.

TABLE X. IMPACT ON INTERFACE MANAGEMENT FACTORS FOR FIRM A & B

TABLE XI. IMPROVEMENT IN PROJECT PERFORMANCE IN FIRM A & B

The major research limitation of this research is small sample size, although it is enough to carry out the analyses using PLS-SEM approach. Further parts of model can be investigated in detail by introducing further casual relationships among the constructs. The templates can be further developed to do study the impact of IT application on interface management in construction firms.

[19]Abiniu, A. A and Odeyinka, H. A, "Construction delays and their causative factors in Nigeria", Journal of Construction Engineering and Management", pp. 667-677,2006.

Go to ContentsGo to Main NevigationGo to Footer